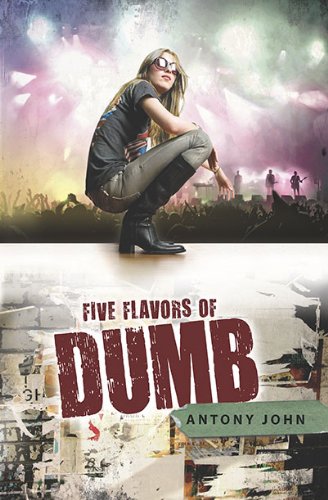 Special congratulations are in order to Antony John, whose upcoming teen novel Five Flavors of Dumb just received its first review—a starred one from Kirkus!Typically, we'd wait until the book appears in stores to ballyhoo a starred review, but we're just so jazzed about this novel that we thought we'd share the good word early. Here's what the smart folks over at Kirkus have to say:

Piper—gutsy, savvy and, yes, deaf—has signed her way into a gig that promises a big, necessary payoff: manager of Dumb, Seattle’s Battle of the Bands winners. Seething with resentment and feelings of inadequacy after her parents raid her college account to pay for her baby sister’s cochlear implants, Piper is determined to shape both Dumb’s future and her own. Piper’s struggles and growth as a manager—she is initially hampered by lack of both experience with intra-band politics and knowledge about music—enjoy realistic treatment, as do her nuanced relationships with family members and the super-talented and adorable Ed Chen. As Piper learns about Seattle’s rock heroes (Cobain and Hendrix), she sees both the band Dumb could be if they would choose rocking over fighting and the person she will become once she truly owns her deafness. Making Piper the manager of a rock band never feels like a cheap trick (pardon the pun) because Piper is not A Great Deaf Character but a great character who is deaf. Complex characterizations, authentic dialogue and realistic ups-and-downs give this title chart-topping potential.

Visit Antony and learn more about how to be DUMB @ antonyjohn.net