A Very Happy Publication Day for MADE BY MAXINE by Ruth Spiro!
October 9, 2018 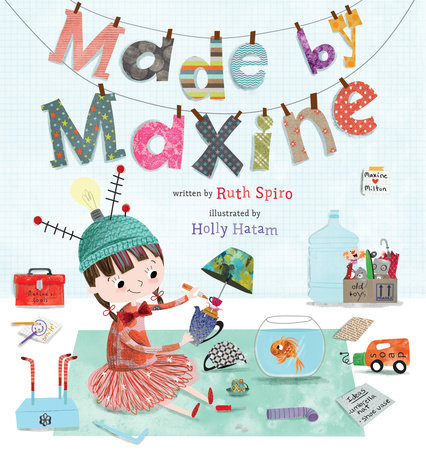 Today I'm delighted to wish a happy pub day to a marvelous new picture book, MADE BY MAXINE, by Ruth Spiro! You'll recognize Ruth's name as the author of the BABY LOVES SCIENCE board books -- this is her newest project.

Meet Maxine, an inspiring young maker who knows that with enough effort and imagination (and mistakes), it's possible to invent anything.Maxine loves making new things from old things. She loves tinkering until she has solved a problem. She also loves her pet goldfish, Milton. So when it's time for her school's pet parade, she's determined to create something that will allow Milton to march with the other animals. Finally, after trying, trying, and trying again, she discovers just the right combination of recycled odds and ends to create a fun, functional – and absolutely fabulous – solution to her predicament.“A clever girl finds a way for her goldfish to participate in her class's pet parade…her ultimate creation adds more fun to the story, as do Spiro's many humorous asides and Hatam's joyful, expressive illustrations….Another worthy book for the girl-inventor shelf.” – Kirkus Reviews“[Maxine’s] plucky attitude prevails, for though she found a million ways to fail, it “meant she was getting closer to finding a way that would” work. Maxine succeeds and, along with Milton, they steal the show. This a great choice for fans of Andrea Beaty’s Ada Twist, Scientist and Jenny Offill’s 11 Experiments That Failed. VERDICT: A fun and uplifting picture book for all libraries that encourages children to engage with STEM concepts.” – School Library Journal[embed]https://www.youtube.com/watch?v=hKeBx71kNY0[/embed]You'll find MADE BY MAXINE at your local library or bookstore. Congrats and happiest of Pub Days to Ruth!