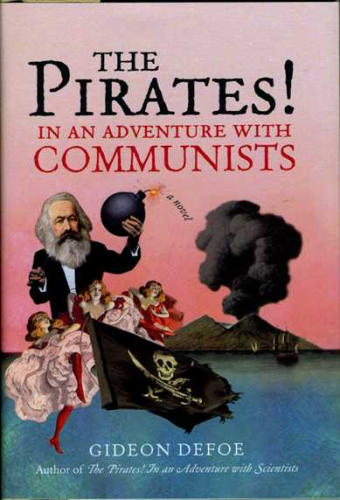 If you are the sort who, instead of writing your pages, dithers on the web, checking up on the news and reading blogs and watching Orson Welles drunk outtakes, then you may well have seen Jackson Pearce's screed against book pirates. Some background: She'd tweeted a few days ago that she must subsist off of ramen because she is broke, and meanwhile her books are being downloaded illegally. People responded to the tweet (apparently in support of book piracy—arrrrr!), and she answered those people with this charming video in which she costars with a pirate puppet.But to my mind, both she and the people she's answering are missing a bigger question, which is this: If those downloaded copies of the book(s) weren't available on a pirate board, would the people who download them instead have purchased copies? That is, what is the actual impact of these downloads on sales?There's no way to be sure, of course, but I'd argue that the effects are negligible or positive. And that, considering that piracy is unavoidable, best then to find ways to make it work to one's advantage—such as using a Creative Commons license. (For a better explanation of all of this, see Cory Doctorow's post at the Guardian—which additionally has some startlingly frank talk about how artists should not expect to make a living from their art; in short, don't quit your day job.)The thing is, people who download illegally? They aren't going to buy the book anyway. They're just not. (Or a few may, but the lion's share never will.) They are part of the culture of ferreting out uploads and taking what's available. They are never going to wander into a bookstore real or virtual to buy the book. I know several of these people—they have files of all the latest movies and albums and like to boast about what they've "got" recently.They are habitual thieves of a sort, but never mind that: They do talk up what they've got. They are one part of word-of-mouth. A scurrilous part, surely, but a group whose activities and talk may well spur awareness of a project—whether album, film, or book. As Doctorow has said elsewhere, his biggest fear isn't that people will download his book for free, it's that they will have never heard of it.If the piracy of intellectual property is unavoidable (as it seems to be), then the only recourse is to create art that creates fans—people who are willing to support it. I have had friends "slip" me downloads of albums that I then went out and bought (in some cases—as with Frank Turner—six copies over time, more than paying him back for the brief time I "pirated" his album). I've become a fan, and it was because of that first sample. It may well have to be this way for authors, too.What do you think? Is free the way of the future? How are authors going to make a living once everything is digitized and available for the price of a little bit of poking around the internet?