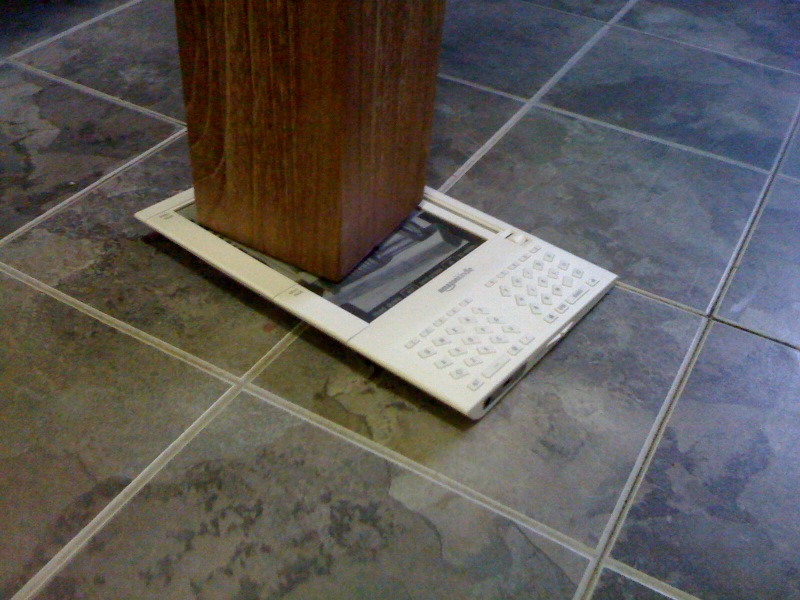 Oh, Jeff Bezos. There was a time when I was a true believer. I bought the first generation Kindle relatively early on—March or April of '08, thereabouts. I was impressed (or flattered, anyway) by the letter from you that came with it, complimenting me on being a daring early adopter, one of the few, the proud—The ripped-off.Mind you, it did work for just over a year. Sure, the back came off all of the time, and the clumsy design meant I was always turning pages by accident (seemed like every edge of the damn thing had a page flip button). Sure, reading off of a gray screen is nowhere near as fine as reading off of a crisp page, but hey, it's a new technology! It's trailblazing of the sort that heralds a new era! It's—well, how the future looked back in 1982! Sure it's a homely little device, but who besides Steve Jobs ever said technology should be pretty and appealing?For my four hundred bucks, I got about thirteen months of use out of it before the screen froze up. Now half of the screen is one of those cutesy sleep screens, and half of the screen is functional—there are still books and manucripts there, half-legible behind the stuck the save screen. (Happily not that phony prettified image of Emily Dickinson.*)When it froze up, I shot Amazon an email. I was told that the warranty was only for twelve months and to call them to be walked through a hard reboot of the device. I dawdled on making the call, because I was launching a business and so on, and everything else in life fell by the wayside.Finally I called. Rebooting? Didn't really work. But I was informed that, despite being out of warranty, I could send in my Kindle and another hundred bucks to Amazon, and they would send me a refurbished Kindle. Which, judging from how these things work, would last about a year. Could I get a further discount on the new Kindle, which is already discounted to $260 or so? No. I could only get the old, tired, lousily designed first generation. Because that, my friends, is the reward for early adopters.So instead, I used my Kindle to support my off-kilter kitchen table and decided to wait for the Apple iSlate. Yes, it will be a backlit screen that will tax the eyes, but a person can dim that to a point where it will be less bothersome. And page flips can be done with a dragged finger. And doubtless I'll be able to edit on it. And I can't help but think that there will be many, many, many options for downloading books that will allow me to avoid Amazon's proprietary e-book system entirely. And customer service at Apple is a wonder; when my first iPhone went on the fritz, the service guy there said, "Hmm, did you drop it? It looks like there's a dent here." I said, "Umm ..." And he said, "Let's just say that you told me you didn't drop it, and I'll give you another phone."And just like that, they won my business for the rest of eternity.*That digitized image of Emily Dickinson featured on the Kindle save screen? It is a bastardization of the only known photograph of ED, which is of her in a black dress with her hair pulled back. Shortly after her poems became popular after the turn of the century, she was included in an anthology, but the editor didn't like the original image—thought it was too severe. So the image was doctored to make her look more ladylike in the eyes of the editors—she was given ridiculous bangs and a fluffy white collar and dress. When the ruse was discovered, there was an outcry and the image was removed from circulation by most self-respecting publishers. Leave it to Amazon to unearth this horror and to repeat exactly the judgmental, prudish nonsense of the snobs of a century ago. Bravo, you morons!