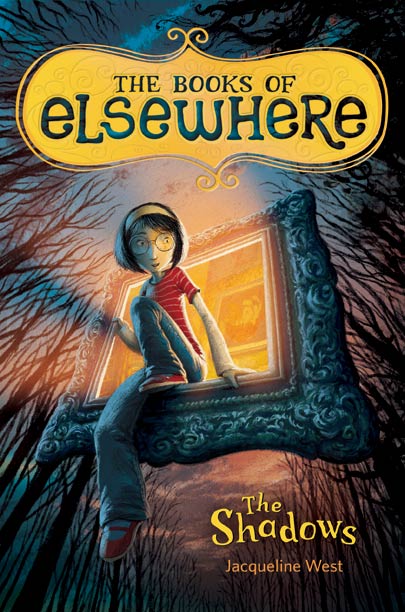 If you've seen me speak at a conference, read my online interviews, or follow me on Twitter, you've likely heard me mention Jacqueline West's THE BOOKS OF ELSEWHERE VOL I: THE SHADOWS. The truth is, I love this book. Jacqueline's story was the first project I ever signed as an agent, and I've been anxiously waiting two long years for it to come out so that everyone else could see what made me fall so hard in love with this story, these characters, and this remarkable writer.I'm thrilled to share that the fine folks at Publisher's Weekly loved the project enough to give it a starred review. They write:

The Shadows Jacqueline West, illus. by Poly Bernatene, Dial, $16.99 (256p) ISBN 978-0-8037-3440-1Poet West's debut novel is a quirky and clever beginning to the Books of Elsewhere series. The Dunwoodys, "a pair of more than slightly dippy mathematicians," and their 11-year-old daughter, Olive, have just moved into an old Victorian house. Olive has learned to be independent, given her parents' aloofness ("Her persistently lackluster grades in math had led her parents to believe that she was some kind of genetic aberration"). She explores the house's eccentricities and discovers that, by donning a pair of spectacles, she can enter the house's many unsettling paintings. Inside one, she encounters nine-year-old Morton, who brings to her attention the secrets that the house and its late owner are keeping. With the help of three talking house cats, Olive works to patch together clues to save the painting-dwellers from their dark fate. The house is as much a character as are Olive, Morton, and her family, and a wicked sense of humor tempers the book's creepiness. A suspenseful plot and insight into childhood loneliness--handily amplified by Bernatene's moody and dramatically lit b&w illustrations--will have readers anxiously awaiting the next book.Mark you calendars for June 15th, folks, to get your hands on this wonderful book!