Middle Grade? Teen? Where Do You Draw the Line?
Michael Stearns 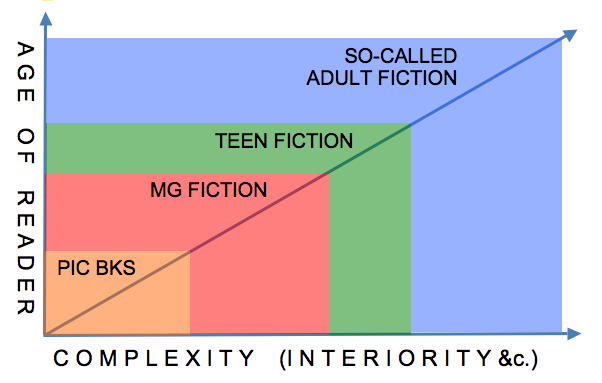 If you have never participated in the Twitter feed #kidlitchat, you really ought to give it a shot. The discussions are always about smart topics and draw a wide range of commentators—both veterans and newbie writers, editors, agents, and the occasional gibbering weirdo. (Speaking only of myself here.) The tweets ratchet up the Twitter client in a fast and sometimes furious stream, so quick as to be nearly unreadable. Trying to follow the many threads of conversation is like watching three hundred tennis matches held simultaneously on the same court—there's no way to keep the threads separate, and yet ... you try anyway.

A recent chat was a gem. The gist of the discussion was this: What qualities make a manuscript middle grade instead of teen/YA? How do you know which you have?

The answers were all interesting and, for the most part, valid. Some dismissed the categories as the joint creation of publishers and booksellers; others tied the categories to the age of a novel's protagonist or a word count; still others quoted interesting takes from fine writers. (My favorite was Tobin Anderson's assertion that for middle grade books, he writes to the target audience, while in teen fiction he writes from the vantage of the target audience.)

[I disagree with a simple "It's the age of the protagonist" saw, if only because there are so many examples of books that don't fit into the box. Here are four off the top of my head: Brian Hall's The Saskiad. Tony Earley's Jim the Boy. John Wray's Lowboy. Russell Banks' Rule of the Bone. The first two are definitely adult in terms of tone and interest level, while the latter two have a strong interest for teen readers and yet are determinedly adult.]

At any rate, none of the suggested criteria seemed to capture my take, which has to do more with a quality of the prose. How complex is the writing? The vocabulary? Does it spend more time on abstraction or concrete things? Does it rely more on the outward markers of experience, or is there an interiority to it? That is—is what happens to the characters' ways of seeing as rich and interesting an element as what happens to the characters in the outward world?

To my mind, there is a direct relationship to the sort of complexity I'm talking about and the age of the readership. In the chart I whipped together above, we have picture books in the lower leftmost corner (Harry the Dirty Dog, say) and in the upper right-hand quadrant, the most self-conscious post-modernist books that are more about their own form and the experience of reading than they are outward experience. (Infinite Jest or most of Pynchon or Kathy Acker and so on.) Between those two extremes are the stepping stones of middle grade and teen fiction.

What are the hallmarks of middle-grade fiction? Well, there are some superficial aspects we can point to:

These nine qualities fit nicely into my little chart up above, but are hardly definitive. But to me, they are among the qualities that tell me where on the spectrum a book falls. We could probably add nine more that are equally legitimate, and then nine more after that. This sort of game allows for endless fine-tuning.

This is why editors "know it when they see it." They've internalized all the little triggers that determine what kind of novel they are dealing with. And the author shouldn't be worrying about any of this, anyway—the author should just write the book that the novel in question wants to be. Let other people determine where it should be shelved.