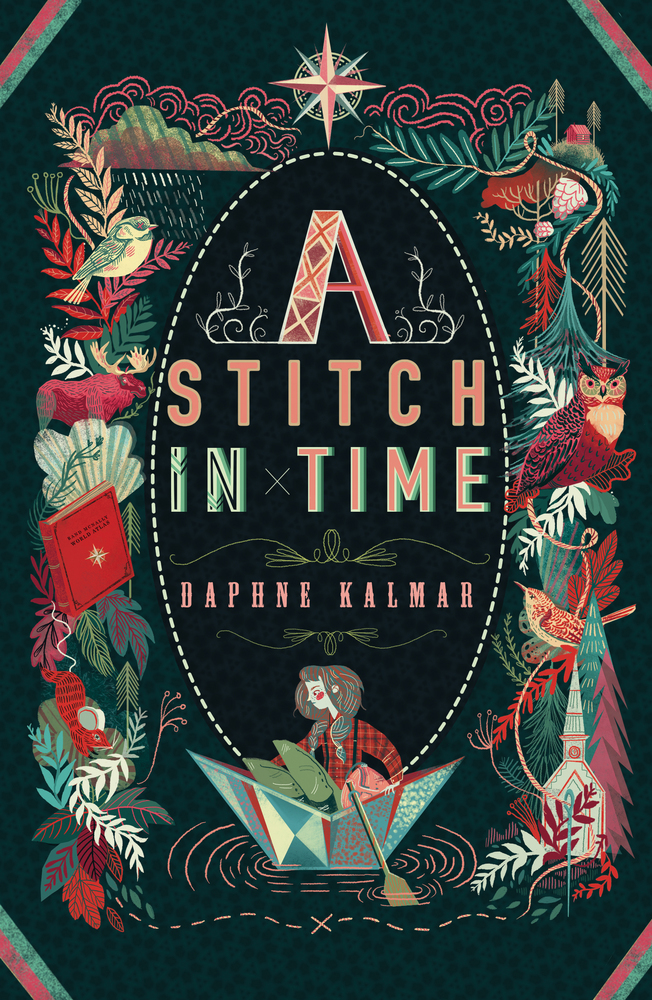 A Stitch in Time

Donut is an eleven-year old geography buff who keeps her taxidermied mice hidden in her late mother’s hope chest. Her pops passed away, leaving her an orphan. Stuffy Aunt Agnes has moved in, bringing along her lumpy oatmeal, knitting, and a plan to drag Donut off to Boston forever.Donut stands to lose everything: her friends, her village, her home, the woods, and walks where the memories of her pops are stored up like the bread and butter pickles in canning jars on the shelf.While Donut dodges the ache of missing her pops, she and her best friend Tiny plan how to keep her where she belongs. When Aunt Agnes is not persuaded, Donut paddles away in her pops’ last invention, a folding tin boat. Holed up in a cabin on Dog Pond, Donut hopes Aunt Agnes will throw in the towel and leave Vermont without her. But Donut isn’t counting on a bear, a leaky boat, or an ache that won’t go away.A STITCH IN TIME is shot through with gorgeous, evocative language, and gets right to Donut’s heart – her hurt, her strength, her struggle to make sense of loss. She’s buoyed by her sense of humor, and this is a book that made me both cry and cackle with laughter. But perhaps what I love about it most is that it’s not just about loss, it’s about renewal.Blurbs and reviews:

Praise for A Stitch in Time

Chosen by BookPage as one of the Best Books of 2018

A finalist for the Vermont Book Award

★ "Kalmar’s debut has an authentic voice that brings her protagonist vividly to life and lends her struggles with grief an immediacy that belies the 1927 setting. Donut is brassy and flawed but easy to love, especially in light of how much she values friendships and her growing self-awareness." ―Booklist, starred review

★ "Kalmar introduces a delightfully intricate character in Donut, whose passions include bird taxidermy, memorizing tidbits from the atlas Pops gave her, and her friendships with affectingly portrayed Vermonters. The author leaves readers knowing that her insightful, articulate, and wry heroine will land―solidly―on her feet." ―Publishers Weekly, starred review

"Kalmar transports readers into the woods of Vermont with her vivid descriptions. Readers will empathize with Donut’s heartache over the loss of her father and her fierce desire to resist change at all costs. A superb read-aloud, educators and readers will find much to discuss." ―School Library Journal

"For more than 20 years, debut novelist Daphne Kalmar was a teacher who loved introducing her students to the natural world. Her affection for the animals and landscapes of Vermont’s northern kingdom is apparent throughout A Stitch in Time, but what will really win over readers is her novel’s heroine. With her big heart and an openness to adventure, Donut is an affecting blend of toughness, vulnerability and fearlessness. A Stitch in Time would make a wonderful read-aloud and provides an opportunity for parents and children to talk about grief, love and self-reliance."―BookPage‍

"Taxidermy? What better journey to uncover the true stuff of character! A classic, indelible debut." ―Rita Williams-Garcia, author of the Newbery Honor novel One Crazy Summer

"Heartbreaking and heartwarming at the same time, Donut’s story is gritty, hopeful and ultimately all about the various ways that love shows up. I loved it.” ―Kathi Appelt, author of the Newbery Honor and National Book Award finalist novel The Underneath