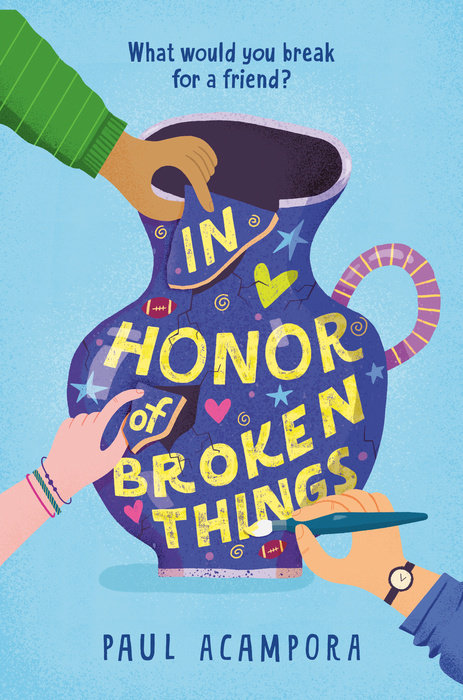 In Honor of Broken Things

Three unlikely friends become partners in heartbreak and hope during a middle school pottery class in this powerful, poignant novel—perfect for fans of Gordon Korman and Lynda Mullaly Hunt.

At West Beacon Middle School, eighth graders Oscar Villanueva, Riley Baptiste, and Noah Wright become unlikely friends during Introduction to Clay class. Oscar, a football star, just lost his little sister to cancer. Riley’s been dragged away from Philadelphia by her single mom to a new life in West Beacon, a tiny Pennsylvania coal town that’s smaller than Riley’s old school. Noah’s spent his whole life as a homeschooler and just started West Beacon Middle School as a result of his parents’ train wreck of a divorce. Through art, football, failure, faith, and trust, the friends help one another to piece things back together again. In true friendship, they also discover that some injuries may never heal, some things can never be unbroken—and that’s okay too.

★ “Three students united by their respective family troubles form a supportive friendship circle in Acampora’s earnest narrative, which encourages vulnerability and acceptance...Told in distinct and alternating POVs, the group grows closer over misshapen pottery as they admit weakness, navigate new experiences, and learn to accept help from others. Acampora approaches the characters’ struggles with levity and intentional thoughtfulness, making for a tender tale.” — Publishers Weekly, starred review

“With brokenness as a theme, crushing sadness could have sunk the narrative, but Acampora leavens the story with Noah’s humor, Riley’s tell-it-like-it-is feistiness, and Oscar’s openness to receiving help.” — Horn Book Magazine

“A solid story of friendship...characters are multidimensional and compelling, and the plot includes some unexpected turns as the friends find that some wounds may not heal. Despite these twists, the book has a hopeful ending, leaving readers eager to learn more about the characters.” — School Library Journal