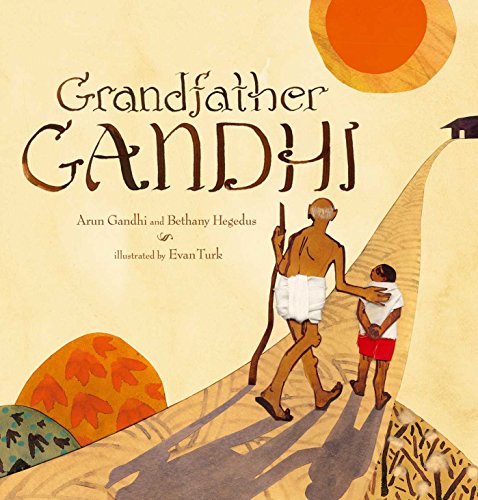 Mahatma Gandhi’s grandson tells the story of how his grandfather taught him to turn darkness into light in this uniquely personal and vibrantly illustrated tale that carries a message of peace.

How could he—a Gandhi—be so easy to anger?

One thick, hot day, Arun Gandhi travels with his family to Grandfather Gandhi’s village. Silence fills the air—but peace feels far away for young Arun. When an older boy pushes him on the soccer field, his anger fills him in a way that surely a true Gandhi could never imagine. Can Arun ever live up to the Mahatma? Will he ever make his grandfather proud? In this remarkable personal story, Arun Gandhi, with Bethany Hegedus, weaves a stunning portrait of the extraordinary man who taught him to live his life as light. Evan Turk brings the text to breathtaking life with his unique three-dimensional collage paintings.

★ "More than 10 years in the writing, this true story by Gandhi’s grandson and Hegedus (Truth with a Capital T) gives a personal window inside the peacemaker’s teachings…. [A] rousing family story that speaks to a broad audience.” ― Publishers Weekly, December 2013 (starred review)

★ "Never burdened by its message, this exceptional title works on multiple levels [as] both a striking introduction to a singular icon and a compelling story." ― Kirkus Reviews, January 2014 (starred review)