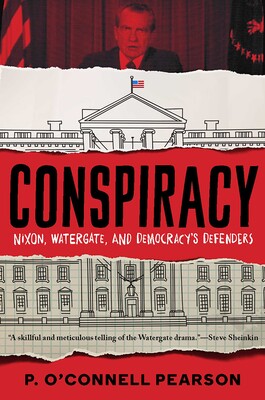 The story of President Richard Nixon and those who fought against him comes to life in this insightful and accessible book.

The Watergate scandal created one of the greatest constitutional crises in American history. When the House Judiciary Committee approved three articles of impeachment against President Richard Nixon and the Supreme Court ruled that he had to turn over to Congress the tapes that proved the claims against him, he realized his support in the Senate had collapsed. He resigned rather than face almost certain conviction on abuse of power and obstruction of justice.

We know the villain’s story well, but what about the heroes? When the country’s own leader turned his back on the Constitution, who was there to defend it?

Conspiracy is about the reporters, prosecutors, judges, justices, members of Congress, and members of the public who supported and defended the Constitution when it needed it most.

A Bank Street Outstanding Book of 2021

"I believe every student in the country would benefit from reading this book. Social studies teachers will appreciate the comparisons of this event to today's political climate. All school librarians will definitely want to add this title to their collections. Highly Recommended.” —School Library Connection

"Smooth, clear writing makes this an appealing and accessible read. A cautionary episode from a half-century ago that ends up sounding eerily relevant.” —Kirkus Reviews

"A compelling introduction to the Watergate scandal and the constitutional crisis it created...This rousing, accessible historical narrative offers opportune cautionary lessons about voting, civic involvement, and the importance of a free press.” —Publishers Weekly

"Pearson agilely walks the line between textbook history and popular true crime, and readers with a taste for political scandal may find this a rewarding precursor to Sheinkin's Most Dangerous: Daniel Ellsberg and the Secret History of the Vietnam War. Timeline, endnotes, and period photographs are included.” —Bulletin of the Center for Children’s Books‍

"What can American citizens do about a president who thinks he's above the rule of law? A lot, actually, as Pearson shows in this skillful and meticulous telling of the Watergate drama." —Steve Sheinkin, National Book Award finalist & Newbery Honor author of Bomb and Most Dangerous